To celebrate #RoboWeek, we're throwing it back to personal projects that inspired our own Exyneers.

To all those wondering if they slept through the robotic uprising, not to worry you still have time to learn Kung Fu. National Robotics Week -- according to the official website -- is a time to "inspire students in robotics and STEM related fields, and share the excitement of robotics across all ages."

In fact, many of our current Exyneers (Exyn engineers) discovered their passion for robotics at a young age, and we love hosting groups of students (in person or virtually) to show them the autonomous robots we get to work with every day. While it can seem daunting to create an autonomous robot all on your own, introductory competitions like FIRST provide the spark of inspiration students need to launch a career in robotics.

So to celebrate our favorite week-long holiday, we wanted to share some pre-Exyneer projects to show you how they got their start and hopefully inspire the next generation of roboticists.

As you can see, cell phone cameras have come a long way since 2008

Created by the Winchester Robotics Team and our own Alex Burka, Sovereign was the first fully autonomous robot in BotsIQ history. Students actually proposed the autonomous competition, complete with a course and rules.

Sovereign used a gimballed sonar sensor (similar to what we use on the ExynAero) to see obstacles in the environment and plan a route to its objective sending instructions to the motors. 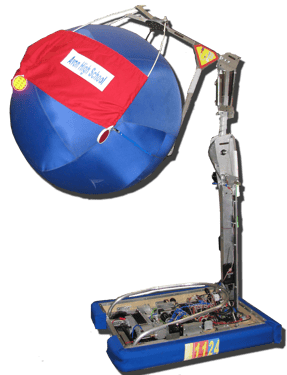 What does it do? "Chucks a giant ball at high velocity." And the reflectors? "Chucks it with style." 😎

Lightning was developed by FIRST Robotics Team 1124, The UberBots, and our own Billy Sisson. The game for FIRST in 2008, Overdrive, required teams to construct a robot capable of picking up and carrying a giant ball around the track to score points. Teams could also score points if their robot could hurl a giant track ball over a 9-foot "overpass" in the middle of the track. The robot was built with a 2 speed transmission so that it "could have both the speed to make it around the track and the precision to pick up the large track balls."

Coincidentally, Alex was building Sovereign with his team in 2008 too. Who knew 2008 was such a great year for robotics?

Would have a hard time not yelling, "boom! roasted!" after every cup

This absolutely magical robotic morning pick-me-up comes in courtesy of Ben Scheinberg, designed during his Freshman year at Drexel University. While it won't be replacing your favorite barista just yet, this bot is capable of making you a morning cup of joe from unroasted bean to final brew. But I wouldn't read the Yelp reviews. 🤮

Winning the award for best name, the SubjuGator is an autonomous underwater vehicle project designed and built by students of the Machine Intelligence Laboratory (MIL) at the University of Florida, including our own Seán Matthews. The robot was designed to dive up to 20 feet underwater, maneuver under a gate and inspect a pipeline before returning to the surface. Last, but most certainly not least, are the quadrotors. If you're familiar with the University of Pennsylvannia's GRASP Lab you might know that's where Exyn spun out of, and where we've drawn some of our talent. One of those talented individuals is Justin Thomas, our Technical Lead, Autonomy & Mapping, Controls.

Aside from being the better half of Exyn's Justins, he was pioneering some seriously cool autonomous microquads at Penn. First up, he taught them how to fish like an Eagle.

Looking for further inspiration from the animal kingdom, Justin taught his bots how to hang on for dear life.

Making sure these bots swear to me ...

But being a roboticist isn't just teaching a robot to stay, grab, and perch. Below is an example of some serious aerial autonomy where a quadrotor is programmed to adjust it's optimal trajectory to follow an object of variable velocity.

We hope you all have a fantastic Robotics Week! If you're interesting in becoming an Exyneer and helping us pioneer GPS-denied autonomous aerial robots, apply here!

And if you're interesting in learning how the ExynAero can help you capture impossible to reach data, request a virtual demo today.