We are testing the limits of our real-time mapping engine. The results are quite promising.

Now that we have launched our fully autonomous aerial 3D mapping solution, the A3R, we are testing the limits of our real-time mapping engine. The results are quite promising.

In recent tests, we simply took the Exyn mapping payload, mounted it to a truck and drove it first around a stockyard and then deep into an underground mine. No specific tuning or tweaks were made to enable the algorithms to work on a vehicle and the same simple and easy to user interface was employed for data collection. We simply hit hit “go” on the ExynView tablet to initiate the sensors and algorithms - and started driving.

What you see in the videos is the map generated as the vehicle drives around a mine site.  In the first video, we drive around a stockyard. In the second video, we drive deeper and deeper into an underground mine. The road is unpaved gravel and the sensor payload experiences all the bumps and jostling that comes with driving on that type of terrain. The map shown in the video is generated in real-time, allowing the user to inspect the data continuously as it is collected, thus ensuring it is comprehensive while out in the field.

Data collection and mapping while driving comes with a unique set of challenges compared to flying an aerial robot. The bumpy-uneven roads introduce high-frequency vibrations to the entire sensor payload, introducing noise to the sensor data.  The car changes direction, turning with the bends in the road and around corners. Outdoors, we have to be able to handle scenarios with dense features, such as driving through tree-lined roads as well as open areas with sparse features, such as in an open parking area. In order to drive down the mine entryway, we cannot make assumptions about flat ground plane which would inherently limit the utility of our system.  Moreover, many levels in the mine have similar geometry, so being able to differentiate these locations is an added challenge.

We use multiple sensors to enable robust mapping despite varying geometry in the environment and high accelerations due to the rapid vehicle motion over bumpy surfaces.  The rotating LiDAR sensor positioned on top of the vehicle provides nearly full spherical coverage around the vehicle. The 2.7km distance covered to generate a map of the stockyard and 4.6km underground demonstrates the robustness of the mapping algorithm. Normally, odometry-driven algorithms, which ultimately rely on the vehicle sensing or estimating its incremental changes in position and orientation, will “drift” over time.  This drift is due to the accumulation of error and it can result in significantly degraded map quality. For example, with high-drift, objects in the environment may appear “blurry” or out of focus. The same object may even appear at two different locations in the same map!

Our Simultaneous Localization and Mapping (SLAM) pipeline is able to avoid these sorts of errors by carefully selecting and intelligently tracking stable geometric features in the vehicle’s environment.  This ability, coupled with online optimization of the map to ensure global consistency and accuracy, is what sets our solution apart. The result is a high-resolution map that is capable of being ingested into a variety of systems and that can be leveraged for rapid decision-making. 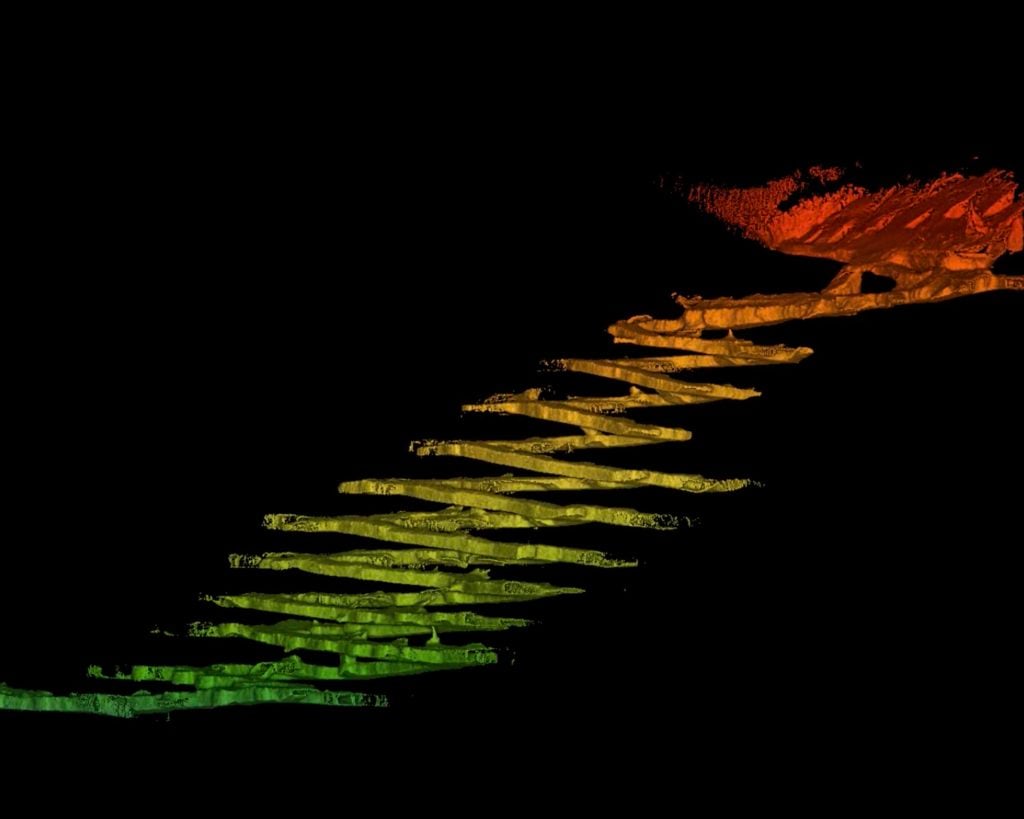 We used the same sensors and computation payload, running the same algorithms, without any specific tuning or tweaking to generate the map from these drives as we use when the Exyn A3R flies autonomously underground. The technology does not use GPS, external fiducials, infrastructure, or prior maps. This is a testament to the robustness of Exyn’s algorithms for Simultaneous Localization and Mapping (SLAM).

This is the same foundational technology that enables Exyn’s robotic autonomy. For a robot to plan paths through its environment, it requires the ability to generate 3D maps in real-time and localize itself within this map. These high-quality dynamic maps of the environment allow the robot to adapt its path to changes and avoid obstacles. Long autonomous missions are possible because the high-resolution, low-drift maps provide accurate data throughout the duration of the mission, enabling the robot to perform complex tasks, such as exploring an extensive area and then returning home to its starting location.

By combining the data collected using ground and aerial platforms, the reach of our mapping capabilities is endless!