The Most Sophisticated Level of  3D Aerial Autonomy To-Date At Level 4A Autonomy, Exyn’s drones are now capable of free-flight exploration of complex spaces, with complete determination of flight path—at 2+ meter/second flight speeds (2X the previous standard), and with higher quality data collection in larger volumes. In ideal conditions, Exyn’s drones can cover 16 million cubic meters in a single flight, or the equivalent of 9 football stadiums.

Unlike previous industry standards of aerial autonomy that use waypoints and multiple flights to obtain adequate intelligence, Exyn’s drones are completely self-reliant for open-ended exploration and do not require any human interaction during flight. This is a major step up from the previous Level 3 standard, in which a human operator or driver is required to be present and available to take control of the system at any time. 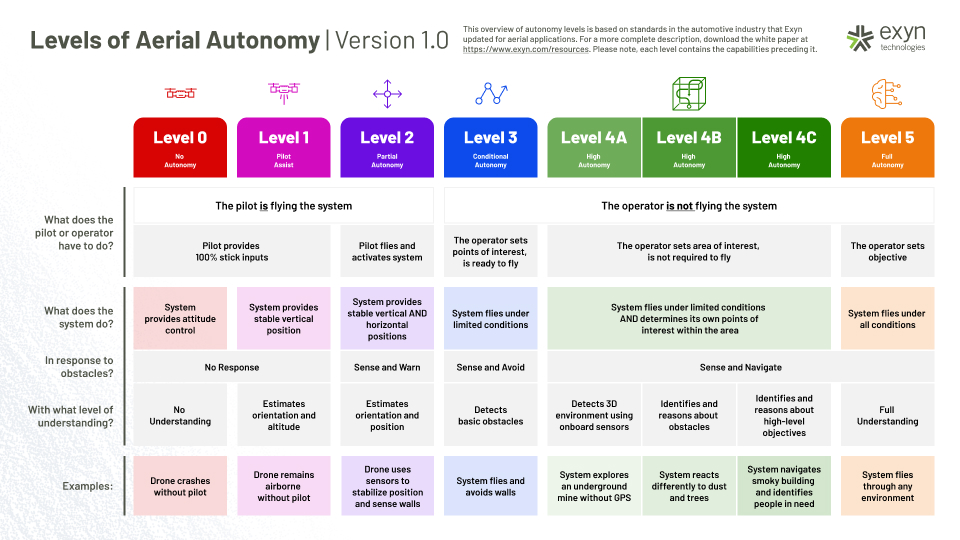 Our breakdown of levels of aerial autonomy, version 1.0.

“Exyn’s latest technology demonstration pushes the boundary of what can be done with autonomous flying systems in situations where GPS is not available. Getting aerial systems to fly reliably in cluttered environments is extremely difficult and manual piloting in underground settings is often impossible.” said Camillo J. Taylor, Raymond S. Markowitz President’s Distinguished Professor, Computer and Information Science Department at University of Pennsylvania. “Having a solution that allows human operators to task these systems at a very high level without needing piloting expertise opens up a number of applications in autonomous inspection of mines and other critical infrastructure.”

“The ability for UAVs to fly beyond the operator's visual line of sight has been a milestone in achieving true pilotless autonomy. Most players in this space have achieved Level 2 or perhaps Level 3 autonomy at best, which in the best cases necessitates persistent communications and a fallback-ready human operator to intervene or direct the system to complete the mission,” said Nader Elm, CEO of Exyn Technologies.

“Our systems are not only the most sophisticated available commercially worldwide, but the unique capabilities we possess are fundamentally necessary for safe and successful operation in the most challenging of environments. This has been the missing link to maximizing the success of critical applications, such as industrial inspections, search and rescue missions and Intelligence, Surveillance and Reconnaissance (ISR) for government operations.”

In simple terms, comparing previous autonomy standards with that of Exyn is like the difference between self-navigating a single, defined road versus uncharted terrain in unknown and unmapped territory. Unlike a car, however, a drone must be able to maneuver within three different axes and pack all its intelligence and sensors onto a fraction of the total body size with severe weight restrictions.

“People have been talking about Level 4 Autonomy in driverless cars for some time, but having that same degree of intelligence condensed onboard a self-sufficient UAV is an entirely different engineering challenge in and of itself,” said Jason Derenick, CTO at Exyn Technologies.

“Achieving Level 5 is the holy grail of autonomous systems—this is when the drone can demonstrate 100% control in an unbounded environment without any input from a human operator whatsoever. While I don’t believe we will witness this in my lifetime, I do believe we will push the limits of what’s possible with advanced Level 4. We are already working on attaining Level 4B autonomy with swarms, or collaborative multi-robot systems.”

Exyn has successfully commercialized industrial-grade drone autonomy with major customers in mining, construction, and logistics, and is rolling out Level 4 autonomous capabilities over the next few months.