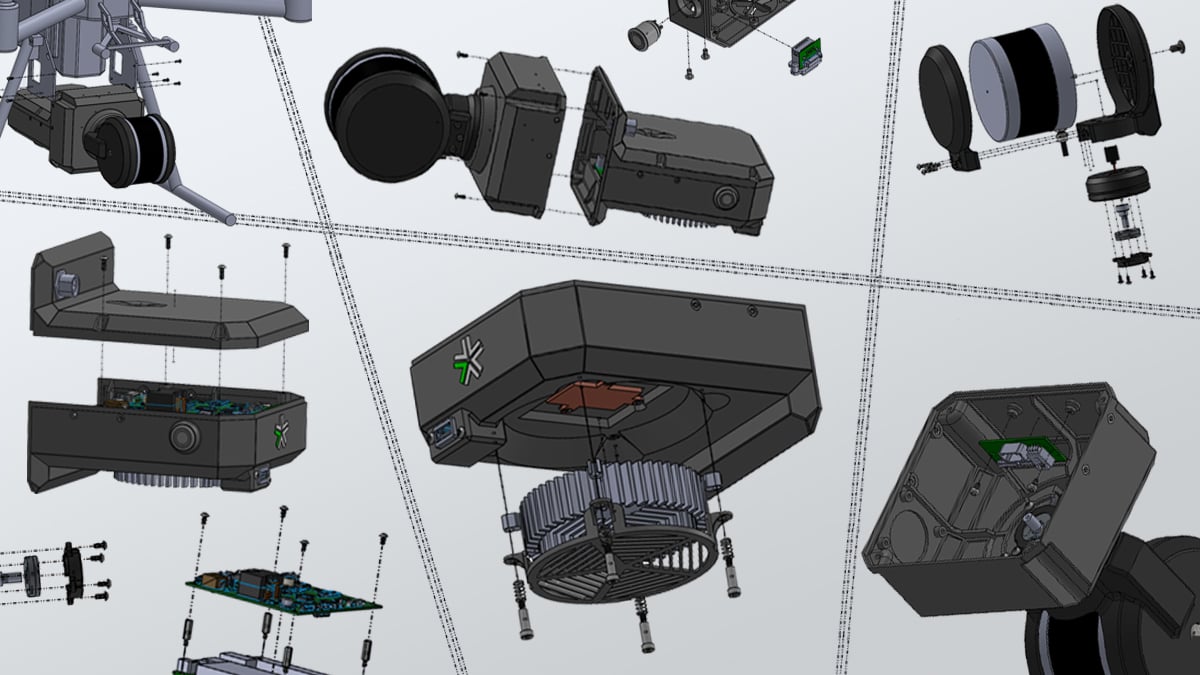 Product design for a tech startup is a fast paced, constantly iterating adventure.

3D printing has long since secured a place in the product development life-cycle. The ability to  realize complex geometries and rapidly iterate design changes without the high up-front costs of traditional processes such as CNC machining and injection molding is especially valuable in the start-up world. Exyn is currently leveraging 3D printing across our designs to quickly deploy our industry-leading ExynAI autonomy software onto a wide range of commercial drone platforms. This article will highlight the ways that Exyn is currently leveraging 3D printing for not just prototyping, but for production ready parts. 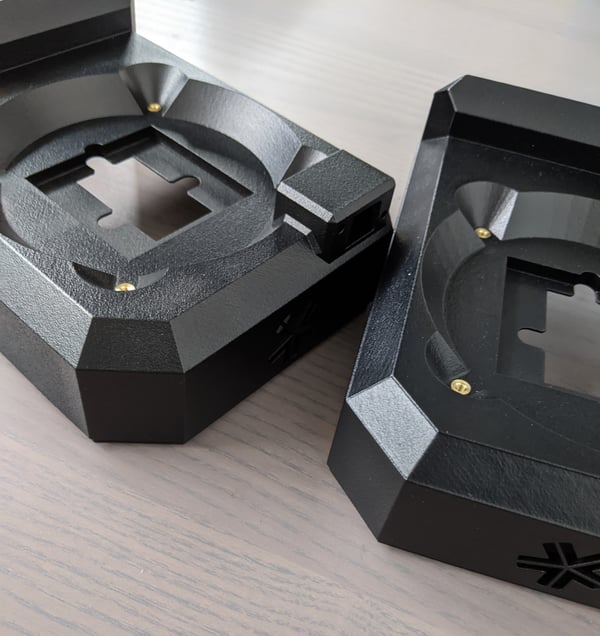 From a software perspective, the ExynAI stack is designed to be platform agnostic, meaning that it can be deployed to a wide range of drones and other robotics systems. From a hardware perspective, we aim to achieve that same flexibility. 3D printing is a key tool that allows us to do so.

With 3D printing, we’re able to custom design mounting interfaces for our core compute and sensor stack, commonly referred to internally as our “Flight Guide.” By leveraging 3D printing we can design and fabricate a custom mounting interface in a matter of weeks, enabling us to have a working prototype upon which to configure and optimize our software performance.

Here's a look at what our typical development process looks like:

A major advantage of 3D printing is the flexibility to adapt this workflow according to project needs without incurring significant sunk costs such as tooling or time lost to long lead times. For example, some projects may require multiple cycles of design refinement and prototyping while other projects may only require a first prototype for demonstration to potential customers. These initial demonstrations may drive revisions to critical requirements, however our development process gives us the flexibility to revisit requirements and redesign to meet customer needs.

For Exyn, the benefits of 3D printing can be summarized as follows:

Here are a few examples of how we have incorporated 3D printed parts in the hardware design for the Exyn A3R.

In an earlier blog post, as we transitioned from our prototype to production design, an important goal was to reduce the Bill of Material (BOM) count and simplify the overall assembly. To do so, we designed a custom enclosure that incorporates all of the mounting features within a two-part assembly. 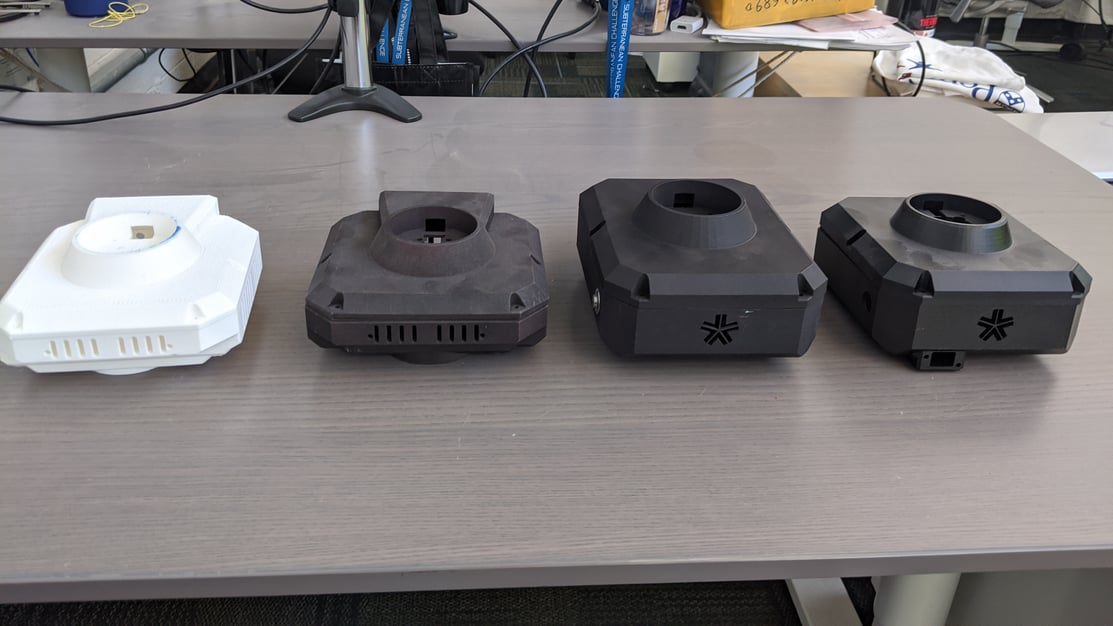 This enclosure includes features such as pre-assembled threaded cable mounting inserts. This design was able to achieve a 50% reduction in the BOM part count and reduction in assembly time by nearly 75%. However since that original post, the design has continued to evolve in order to keep pace with advances in Exyn’s autonomy capability and customer requirements. Initial designs featured a top mounted flight guide with upward facing lidar. This quickly evolved to incorporate a downward facing lidar variant, and then forward facing variant.

The flexibility afforded by 3D printing allowed us to reconfigure the compute and sensor configuration to quickly incorporate these changes and transition them from concept to prototype to production baseline.

Beyond the design of our Flight Guide, 3D printing has also allowed us to quickly develop custom mounting fixtures for additional secondary payloads such as cameras, active lighting, and sensor packages. Recent examples include:

Object Detection and Classification Payload for the DARPA Sub-T Competition 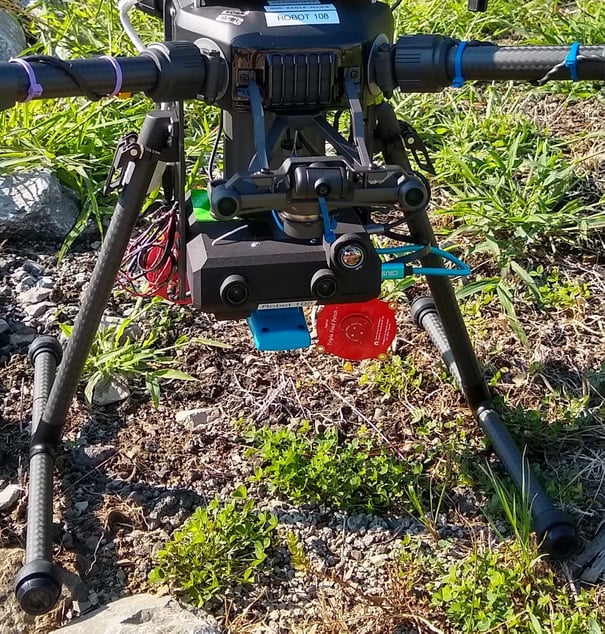 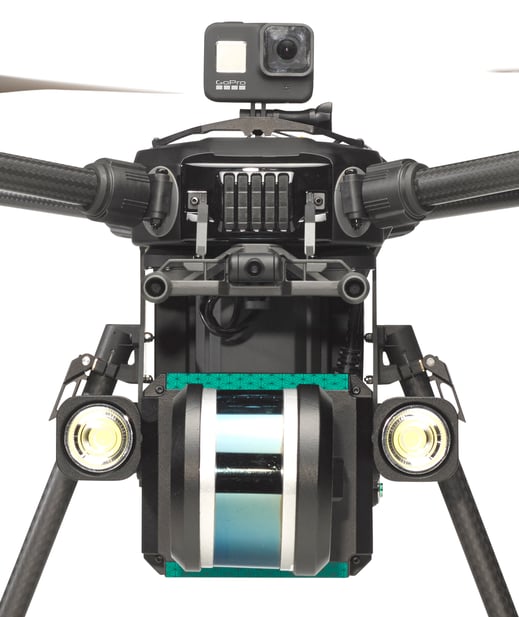 Lights & video provide geologists with more data from inside the stope 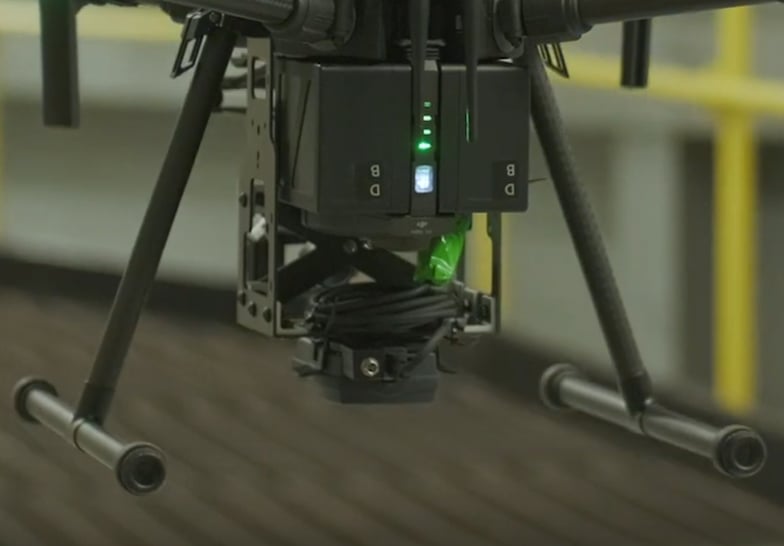 3D printing processes have also enabled us to develop custom features to give our Flight Guide a unique Exyn branding. This includes custom cutouts and custom LED illuminate light pipes to form an LED illuminated Exyn logo. Exyn software is able to control these LEDs to create animated effects as well as provide feedback such as boot up, sensor activity, low battery, and more.

The capabilities of 3D printing also makes it easy to add features such as custom insets for decals and other branding. 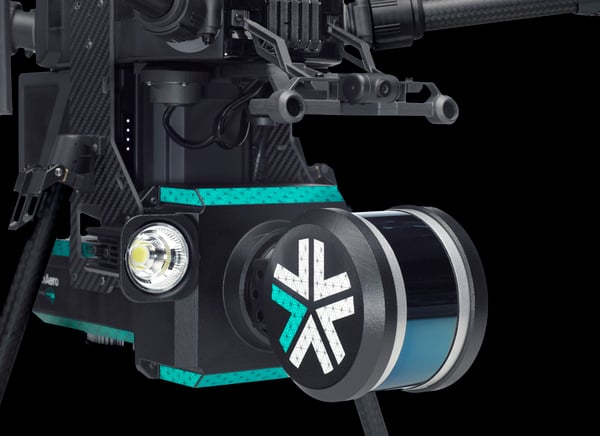 New branding on the ExynAero

Printing An Underground Mine

The complex geometries achieved through 3D printing have also allowed us to construct representative models of the maps built by our ExynAI software. A key competitive advantage of the Exyn drone-based mapping capability over legacy cavity monitoring systems (CMS) is the ability to fly deeper into the mine to capture a more complete representation of the overall cavity.  Exporting these maps, we can use third party software to generate a surface mesh and transform the 3D map into a solid model. This solid model can be scaled accordingly and then 3D printed to provide a side by side comparison of the exyn map against legacy maps.

The ExynAero scanning a stope in real-time

This allows a customer to directly see the vast improvement in the completeness, accuracy, and precision of Exyn maps as compared to legacy CMS systems. These 3D models have become a staple of our customer demos, as well as exhibits at conferences and trade shows.

It should also be noted that 3D printing is not without its challenges.

The ability to rapidly iterate on a design has significant benefits, but must be balanced against the need to establish a stable production baseline.  A risk of rapid design changes is that the product will be released to customers with slight variations that may result in system performance variability. Additionally, part variability will make field servicing more difficult as part changes may affect interoperability with other parts. To combat this, Exyn has implemented version control, including major and minor revision tracking. Each release includes an assessment of the impact of changes to an individual part on other parts and assemblies within the design.

Finally the cost of 3D printing must be considered within the overall scope of the design. On a per part basis, 3D printed plastic parts may cost 10X as much to produce when compared to traditional processes such as injection molding. However this calculation does not include the tooling and setup costs for the mold itself.

As this case study shows, when amortizing this tooling cost over the production volume, 3D printing remains a more economical option until volumes greater than ~250 pieces are achieved.  This break-even point is heavily dependent upon part size and complexity so it is difficult to establish a firm inflection point. A good rule of thumb is that for part volumes less than 100 pieces, 3D printing will be more economical, while for volumes greater than 1000, injection molding may be more economical.

In Exyn’s case, there are other considerations that make 3D printing our preferred fabrication method. The ability to make design changes allows our hardware baseline to keep pace with the changes on the robotics side, without incurring costs due to tooling changes. As discussed earlier, the design complexity allowed by 3D printing would require significant redesign to meet the limitations of injection molding.